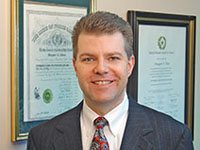 Rod Vujovic is a graduate of DePaul University College of Law in Chicago, where he received his law degree (J.D.) in 1996, and a Masters of Laws degree (LL.M.) in Health Law in 2001. His legal background has primarily been concentrated in the field of consumer bankruptcy law, including working as an attorney for the Midwest's largest consumer bankruptcy firm, as well as a Chicago area general practice firm handling cases in consumer bankruptcy law, family law, real estate law, and estate planning.

Rod received his Bachelor of Science degree in Criminal Justice, with a minor in Psychology, from Appalachian State University in 1993, where he was a Dean's List student. He also has Associates degrees in Criminal Justice and Accounting. Rod is licensed to practice law in North Carolina, Illinois, and Iowa. He is a member of the North Carolina Bar Association Bankruptcy Law Section, the National Association of Consumer Bankruptcy Attorneys (NACBA), and the American Bankruptcy Institute.

In addition to his experience in bankruptcy law, Rod has over 20 years of professional experience in broadcasting. He has worked as a radio announcer, using the radio name "Rod Allen", at radio stations in Lenoir, Hickory, and Charlotte, North Carolina. While in law school, he worked as an on-air personality for WLS-FM / ABC Radio in Chicago, the nation's third-largest market.

In addition to helping you escape the pressures of excessive debt, Rod's goal is to help you understand the legal process and make your transition to a fresh financial start as trouble-free as possible.

Rod enjoys spending time with his family and pets and outdoor activities. He is a supporter of local pet rescue organizations and spay/neuter programs to reduce the unwanted pet population.